Can We Get Serious?

To select someone worthy of sitting in George Washington’s chair, sleeping in Abraham Lincoln’s bed and governing from Franklin Roosevelt’s desk, Americans crave a substantial presidential campaign, as long as they don’t have to endure too many boring speeches. Like every human decision-making process, presidential campaigns seesaw between the serious and the silly.

Recent breakthroughs in neuroscience, political science and thedismal science demonstrate what we know intuitively, that human decision-making involves our heads and our hearts. We are neither fully rational nor totally emotional. Similarly, campaigns fluctuate between profound policy exchanges and trivial personality clashes, between significant indicators of future presidential performance and serious idiocy.

A substantial campaign is most likely when history conspires to offer high stakes with stark choices or an incumbent seeks reelection (and it helps if the candidates avoid defining gaffes or temper tantrums). Re-election campaigns in particular are usually well-focused, because at least one nominee presents a defined track record.

The 2012 campaign seems primed to be portentous, with an embattled incumbent confronting an opponent from an ideologically-charged party amid economic turmoil. But every campaign, no matter how high-minded, flirts daily with farce. “Unfortunately, when you run for the presidency your wife’s hair or your hair or something else always becomes of major significance,” John F. Kennedy said, when Walter Cronkite asked about hisforelock. “I don’t think it’s a great issue, though, in 1960.” Actually, the Kennedys’ good looks brought John Kennedy great political luck. 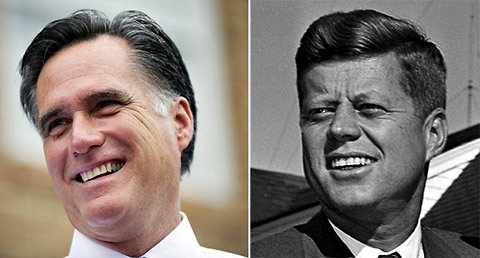 The first substantial presidential campaign — which brought about America’s first transition from a ruling party to the opposition — also teetered between frivolity and philosophy. An ugly brawl between two founding fathers preceded the great deadlock of 1800, which you may remember hearing about during the election standoff in 2000. Federalists called Vice President Thomas Jefferson an atheist, a libertine, a traitor, “the infidel.” Democratic-Republicans called the short, fat pompous president, John Adams, “His Rotundity.” But the election also contrasted Adams’ centralized government championing industrial development against Jefferson’s vision of limited government with limited growth.

The 1800 election was the first to show how presidential re-election campaigns crystallize issues and polarize positions. A challenger need not be as doctrinaire as Barry Goldwater to offer “a choice not an echo,” when pitting boundless hopes against a first-term president’s adjustments to reality. Running for re-election in 1936, Franklin Roosevelt admitted there would be only one issue: “It’s myself, and people must either be for me or against me.” Running a referendum on Roosevelt, the Republican candidate, Alfred M. Landon, called himself “the direct antithesis of the present executive.”

Even landslides do not offer the political equivalent of a blank check, however much it might feel that way. Roosevelt overstepped during his second term, especially when he triedpacking the Supreme Court. He wrongly interpreted his 523-8 electoral-vote triumph as a more sweeping mandate for his New Deal than voters intended. Lyndon Johnson went from feeling, “for the first time in all my life,” truly “loved by the American people,” marveling at “millions upon millions of people, each one marking my name on their ballot, each one wanting me as their president,” to being hounded out of office.

While wartime campaigns often become votes of confidence — or no confidence — regarding the incumbent, the downswing in an American business cycle often yields an upswing in surprisingly theoretical, intensely polemical, debates about American capitalism. During a recession, suddenly everyone is an economics major — or a philosopher.  The Panic of 1893 triggered 1896’s “Battle of the Standards.” Americans escalated arcane questions about valuing paper money, silver coins and gold into a searing philosophical divide that stirred fears of civil war. The major parties nominated candidates with contrasting stands. Converting from currency to morality, William McKinley, the Republican goldbug, said “The American people hold the financial honor of our country as sacred as our flag.” And catapulting from economics to metaphysics, William Jennings Bryan, the Democratic-Populist silverbug defending “the producing masses of this nation and the world” famously cried: “You shall not press down upon the brow of labor this crown of thorns, you shall not crucify mankind upon a cross of gold.” One Republican, John Hay, moaned: “The whole country has been set to talking about coinage — a matter utterly unfit for public discussion.”

Still, good intentions and clear visions do not guarantee Solomonic deliberations. In 1964, insisting that “I’m not one of those baby-kissing, hand-shaking, blintz-eating candidates,” Senator Barry Goldwater envisioned a “lofty, rational presentation of contending beliefs” against President Lyndon Johnson. Goldwater loved his campaign slogan:  “In your heart, you know he’s right.” But with Democrats sneering “In your guts, you know he’s nuts,” and his numbers tanking, Goldwater retaliated. By October he was snarling “Would you buy a used car from Lyndon?” and saying all Johnson did was “lie and lie and lie” — although the patriotic senator recoiled when crowds, riled by his rhetoric, booed the president. Time magazine deemed the 1964 campaign “one of the most disappointing ever.”

Just as ideologues can end up mudslinging, moderates do not necessarily sling mush. Mocking moderates is a great American tradition. Some, like Lewis Cass, the Democrats’ compromise nominee in 1848, earn the contempt. As Americans polarized over slavery, Cass ran as a “doughface,” a Northern man who molded his politics to satisfy Southerners, impressing few, alienating many. “And he who still for Cass can be,” one Whig wrote, “he is a Cass without the C.”

America also enjoys a rich tradition of muscular moderates. Barack Obama has already shown he can run an exciting, crisp campaign from the center. In 2008, both parties nominated centrist senators seeking the swing voters who could sway the election. These crucial voters, like the Reagan Democrats and the Clinton soccer moms before them, made a clear choice, this time for Obama. Interestingly, even though both Obama and John McCain played to the center, they clashed on foreign affairs, economic policy and governing philosophy, and in the process they offered voters two quite distinct alternatives. 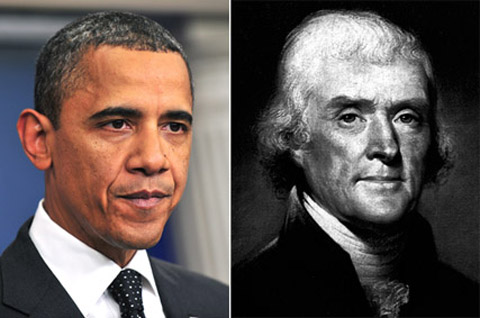 The history of presidential campaigning reveals the ingredients that yield substantial campaigns, including a charged historical context, clashing world views and coherent candidacies.  Still, every candidate remains one slip of the tongue, one gotcha question, onefeeding frenzy, away from the chaos that overwhelms so many campaigns. Americans genuinely yearn for an ideal democratic exercise, one-part university seminar, one-part town hall. Yet the blood rushes, the pulse quickens, interest peaks, when campaigning turns ugly, emotional, personal. The contradictions of popular politics, meaning mass democratic decision-making, don’t just mirror but magnify our all-too-human contradictions as personal decision-makers.