Not Set in Granite

Right now, while we indulge New Hampshire’s childish insistence on its presidential primary being “first in the nation,” Americans should decide to bury this tradition. Nearly a century is enough: the Granite State has somehow turned a fluke into an entitlement. Worse, its obsession with primacy prolongs, complicates and distorts the presidential nominating process. In a democracy, no state should be first forever.

People have been grumbling about this and other undemocratic anomalies for years. But the standoff between Barack Obama and Hillary Clinton in 2008 gave the nominating process the equivalent of a stress test, which it failed.

We can find redemption via randomization. Every four years — in March, not January — four different states, from the North, South, East and West, should begin the voting.

Since 1920, each presidential primary season has started with New Hampshire. Primaries to select national convention delegates first emerged for the 1912 campaign. When New Hampshire officially embraced this democratizing alternative to boss rule for the 1916 contest, the timing served voters’ needs, not state conceit.

The primary occurred in March during “mud season” — after the snow, before the plowing — the traditional time for New England politicking. As the New Hampshire Almanac proudly explains, the legislature scheduled primary day on town meeting day, the second Tuesday in March, because “frugal New Hampshirites” loathed lighting “the Town Hall twice.” By 1920, Indiana, which originally voted earlier, decided to vote in May, making New Hampshire’s primary the first. 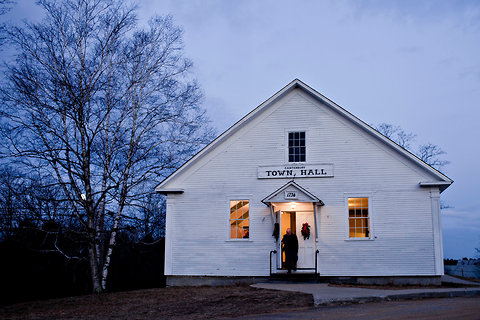 New Hampshire continued to hold presidential primaries, even as the number of primaries dwindled and voter turnout plummeted. New Hampshire’s primary, like most in those days, selected unpledged national convention delegates. In 1949, the legislature popularized the process by allowing voters to designate favorite candidates, too, in what amounted to a non-binding straw poll.

The legend of the cataclysmic “Live Free or Die” primary grew when President Lyndon B. Johnson in 1968 and Senator Edmund Muskiein 1972 each won but faltered by performing worse than expected. Four years later, Jimmy Carter soared after his “better than expected” win – by only 4,663 votes. In 1980 Ronald Reagan stopped George Bush’s “Big Mo.” From 1952 through 1988, every winning presidential candidate first won New Hampshire.

This quaint ritual became a state fetish. In 1975, a state law passed protecting the prerogative. Statute RSA 653:9 now mandates that the primary be scheduled at least seven days before all other primaries.

In 2008, this silly situation became scandalous. When two large, important states, Florida and Michigan, dared to hold January primaries, New Hampshire and Iowa state officials demanded that candidates promise not to campaign in either state. Both Hillary Clinton and Barack Obama cravenly complied. Obama’s name did not even appear on the Michigan ballot.

Hillary Clinton won Michigan’s primary on Jan. 15 and Florida’s two weeks later.  Clinton’s Michigan vote of 328,309 was more than New Hampshire’s entire Democratic vote total of 287,542.  Still, the punitive Democratic National Committee initially refused to seat any delegates from those states. Desperately seeking delegates, Clinton rediscovered the democratic ideal of “one person, one vote” and insisted on counting the delegates she won in those states. Ultimately, the Democrats awarded Florida and Michigan delegates half a vote each. This compromise affirmed party officials’ scheduling power over state legislatures, while at least partially involving these two states’ citizens in the nominating process.

New Hampshire patriots describe their primary as downright Jeffersonian. Like their Iowa counterparts, they claim the state’s size favors humbler candidates who “make their case door-to-door,” intimately, substantively. Yet New Hampshire campaigns are as frivolous as any other American elections. Candidates spend daysflipping pancakes, driving tractor-trailers, slurping chowder, sucking lobster claws. No worse but no better than other states, New Hampshire merits equal but not special treatment.

In 1787, the “bundle of compromises” that created the Constitution repeatedly balanced small states’ prerogatives with those of big ones. Presidential elections are too important, and first impressions too lasting, to cede so much power to one small state today. Potential presidents must handle a huge, diverse, continental America. A randomized rotation, with four different states starting the nomination process every four years, would test the candidates fairly.

Fetishizing New Hampshire’s primary position has become big business, but it’s bad politics. An idiosyncratic state’s aggressive assertion of an absurd claim, indulged by two spineless national parties and a compliant news media, effectively disenfranchises other voters while exaggerating the importance and the effect of tiny wins of a few thousand votes in a nation of more than 300 million. We can do better. After all, we are selecting candidates for what is still the most important job in the world.